Investigating Star-forming Complexes in a Nearby Dwarf Irregular Galaxy 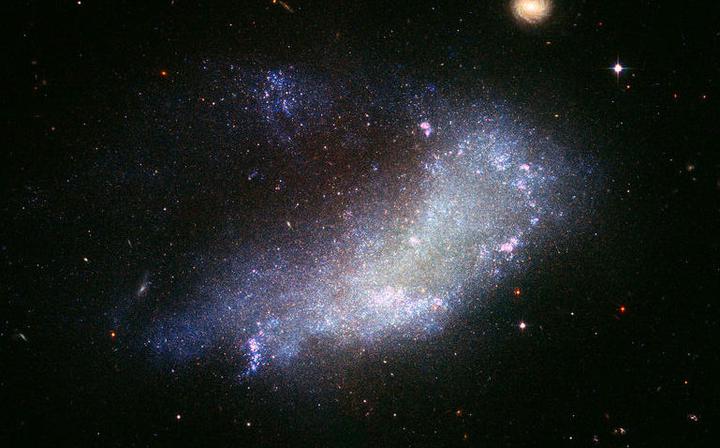 It is well established that galactic clusters provide dynamic environments in which to examine galaxy evolution. The starbursting dwarf irregular NGC 1427A presents an interesting case as it is being pulled into the nearby Fornax cluster at supersonic speeds, producing a visibly exceptional star formation rate and notably blue colors. It has been suggested that the highly deformed structure of NGC 1427A is due to ram pressure stripping as a result of interacting with a super-heated ICM provided by several nearby elliptical galaxies. The gas density profile of its leading edge is similar to a “bow-shock”, containing several dozen super-star clusters (SSCs) and thousands of smaller star forming clusters. It is clearly evident that the properties of NGC 1427A change rapidly over relatively short distances. Using dithered HST/ACS images in Sloan equivalent g' r' i' z' and Hα filters, we present a morphological and photometric study of NGC 1427A using a novel approach in which stellar properties are measured from sources grouped within localized regions. Apertures are fitted for ~5000 sources at 4σ using a filter-combined master image. Four characteristic regions are chosen to study stellar properties, selected interactively through DS9. We then introduce COMET, a specially-designed source catalog handler for producing graphical figures of each region, cropping both spatially and photometrically. These are then batch-reviewed and analyzed using synthetic isochrones corresponding of each region. Hα bright sources are indicated to illustrate the significance of SSCs. Secondary analysis is carried out using smoothed color maps of source-subtracted diffuse light, yielding penetrative mapping of underlying stellar populations. We show for the first time how the dynamical stellar populations of NGC 1427A differ as a function of position across the surface of the galaxy, ultimately furthering our understanding of cluster interactions and the evolution of irregular galaxies. This work is generously supported by NSF grant #1358980.